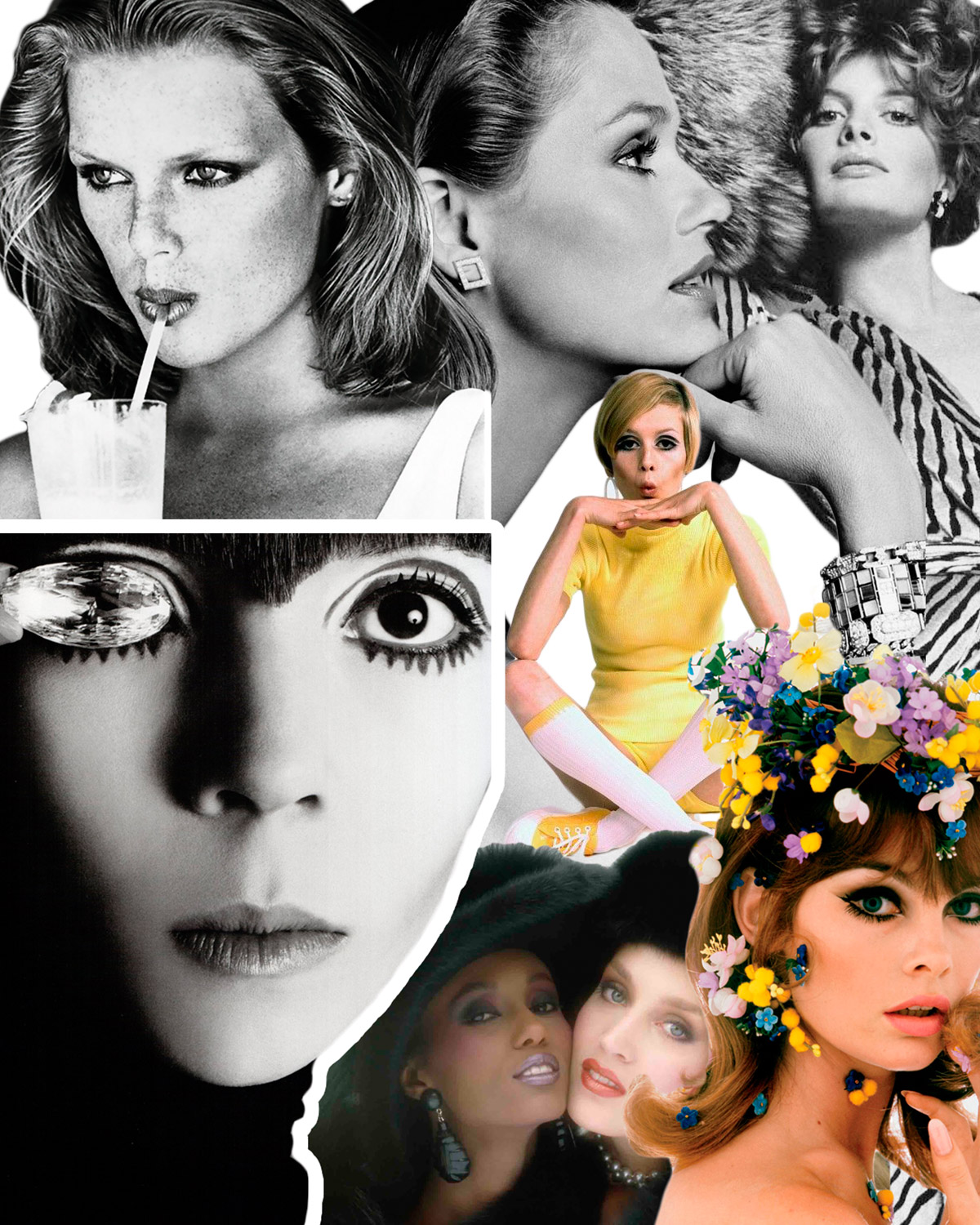 As in the end of the fifties the models were already rebellious for the society, with their super stylish figures and lives that accompany them, they created their own revolution, in the sixties the building of the models as a career continues.

The North American models continued to get jobs with European designers but with the arrival of the swinging sixties in England, it would create the “antimodels” aesthetic or the coolest girls you could have known and probably makers of the sixties look and vibe (next to The Beatles)

Maybe this name does not ring a bell to you but Peggy Moffitt was the first to bring on the loaded “Kabuki Japones” style makeup and the five-prong haircut, giving her a very masculine look at that time. She along with her boyfriend, photographer William Claxton, and designer Rudi Gernreich created the perfect team to make editorials and fashion material where they also helped catapult to fame Lesley Lawson, aka Twiggy. She went on as a beauty model and in one of the photo shoots it was her boyfriend who screamed ‘’Oh, Twiggy!’’ because of her very skinny figure and long legs, this was suggested as her nickname as a model since she was so unique and it represented her very well. With a look full of miniskirts, the garçon haircut style, boots above the knees and loaded makeup, it created the new prototype for all the hyped girls.

Another one of the girls in this “Swinging Sixties” group was Penelope Tree, who came from a wellknown family, which didn’t want her to be a model and when she was photographed by Diana Arbus at the age of thirteen, her family swore to sue If they were published. Imagine if today families would get like this with your improvised photoshoots taken by your BFF, like, chill Mom and Dad!!

In 1966 she attended Truman Capote’s ”black and white ball” and at the party she attracted the attention of photographers Richard Avedon (aka, the model’s father, supermodel creator, muse seeker) and Cecil Beaton, her work with both of them categorized her as it girl and super model. She was also the girlfriend of photographer David Bailey but shortly after they broke up.

A few years earlier, outside this group of Swingers there were two girls who also created their image and inspired designers, artists and girls of their time.

Jean Shrimpton who, like Twiggy, was a model of beauty. She with a slightly more feminine look, very abundant hair and bangs, in 1961 she went out with the photographed David Bailey who acclaimed that Shrimpton was not very difficult to work with, he only took a couple of pictures and he already had Its cover. With a more childlike, sweet and feminine look, she starred in several Vogue UK covers.

And then there’s Edie Sedgwick, the high-society girl who in 1964 moved to her grandmother’s fourteen-room apartment on Park Avenue in New York.

She came to the scene of a rebellious new york, where revolution of the pill, free love, feminine liberation and the fight against racial discrimination were the most important issues, well that and the constant parties.

In this scene was where she met Andy Warhol and soon got a home in “The Fabric”, she starred in several of Warhol’s films like Poor Little Girl, Lupe and Chelsea girl.

Her look of black ballet tights, short tops, stripe t-shirts, very large hoops, fur jackets and aviator lenses along with the loaded makeup were her stamp giving her a look of innocent girl and femme fatale.

She described the city as ”New York was Jackson Pollock sipping vodka and dripping paint onto a raw canvas.”

During the sixties and early seventies, modeling agencies didn’t really existed, the magazines, the editors and photographers were in charge of finding, almost randomly, the new faces of its covers. The models were on the rising but still people didn’t wanted to take them seriously, until two young in love kids had a dream of a house full of goddesses which they could soon represent.

To think that two madly in love persons flee to the city of San Francisco to marry and then to create an empire of women and men brought almost from the Olympus would sound a bit of science fiction and fantasy book, but this was a fact of real life and the story of Eileen and Jerry Ford, the founders of the coveted Ford Models in the 1970s when models became highly sought after for advertising campaigns, television, movies and the celebrated parties at Studio 54.

It is said that the couple invoiced around one hundred thousand dollars a week. Luxury, money, fame and stardom was the DNA of a model of the time, with Margaux Hemingway being the first model to get a million dollar contract. Her perfect face was the image of the cosmetics brands of the moment like Lauren Hutton for Revlon which was the favorite and most iconic for the audience, its advertisements were classic and refreshing like the face of the model who hypnotized Diana Vreeland from the first time.

To imagine yourself walking near a restaurant, entering a department store or a party and being discovered by Eileen Ford was a dream, she was really the fairy godmother for these girls.

Read here the previous article about the History of Modelling: