11 February 2017 in Stories & Interviews No Comments

THE Oh, so wonderful life of CHINA MACHADO 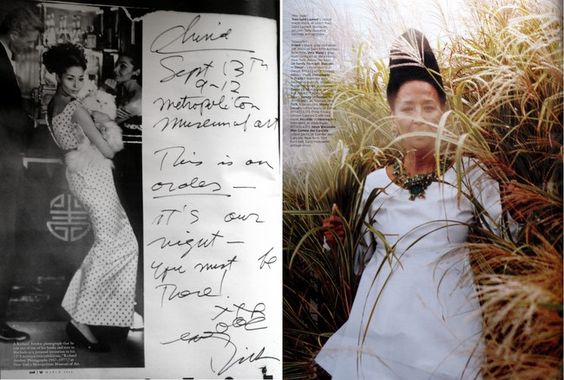 Inter racial models weren’t a thing in 1929 when in Shanghai Noelie Dasouza Machado was born on December 25th (She was kind of our own model lord and savior). With a  portuguese father and Chinese mother, you can just expect a very exotic combination out of it, she had to fled at an early age to South America as the result of the Chinese dictatorship. While receding in Lima, Peru when she was just nineteen years old, she met a young bullfighter, the very talented and handsome Luis Miguel Dominguín, with whom she flew to Mexico, Venezuela and Spain. She changed her name as she remembered the name given to young women with indigenous appearance of “chinitas”, and here’s where the story of the famous China Machado (let me help you, it is pronounced cheena, you’re welcome!) begins.

In these trips she met people from the world of cinema, art and fashion, relating to figures such as Picasso and Ava Gardner. At the end of the relationship with the young man in 1956, China Machado was invited by one of her friends to the city of Paris, where she wanted to model for the house of Cristobal Balenciaga, unfortunately he had already left for Spain but was asked by a person working in the house of Givenchy if she could substitute a model that was sick.

After that first runway, it is requested by Hubert de Givenchy himself if she would like to be one of Givenchy’s models. She always felt at home since the workshop reminded her when her aunts taught her to sew and she knew the hard work that was involved in all this process. Two years later she would also be modeling for Dior and Pierre Cardin. In the late 50’s she was placed by Diana Vreeland (editor of Harper’s Bazaar magazine at the time) at the International Fashion Group Show wearing hot pink Balenciaga pajamas. In this show she was introduced to Richard Avedon and a few months later he would be taking pictures of her for Harper’s Bazaar.

Where she became the first non-white model to pose for the cover, twenty years after this event Richard Avedon confessed her that it almost cost him his work but that he believed in her talent and that he warned them that if they did not accept the photos he would not sign the contract for the magazine, And so the first Euro-asian appeared in the February issue in 1959.

Many times she told that as a young girl she did not felt beautiful since there was no representation of any other culture or race in the movies or magazines. There was no reference of beauty for people like her.

She quit modeling in 1962 and took the work of fashion editor in Harper’s Bazaar where she worked for eleven years.

Years later she would continue modeling, signing a contract with agency IMG when she was eighty years old which was considered to her continuing breaking glass ceilings after so much time. She was also a designer and art gallery owner.

It is almost unimaginable that almost sixty years ago there were no editorials or covers with models of different ethnicities. The talent and charisma of China Machado left a mark on the history of fashion, a legacy full of stories and wisdom: You should be always be in the right place at the right time for the story to begin.